June 20, 2013 was the other happy day for English Language Center (ELC) especially the director Dr. H. Langgeng Budianto, M.Pd. which successfully held “English Fun Contest” in accordance to celebrate the 9th Dies Mauilidiyah  UIN Maulana Malik Ibrahim Malang with all cooperation of ELC committees. The contests were focused on the development and appreciation to UIN students who have trained and practiced their English skill in UIN program which were packed in fun and attractive ways. The categories of the contests were singing contest, dramatic MC contest, and the word quiz. Hundreds students were interested to join the contests. Furthermore, committees were agreed to appreciate the students’ interests by trophies, winner certificate, and money for the winners with free registrations.

The agenda of that day was started by the opening ceremony held in the fifth floor of rectorat building in UIN Maulana Malik Ibrahim. Just like the Olympic game in Athena, all the contestants joined the ceremony with full of spirit, sportive mentality, and great interest at 7 a.m. They follow the ceremonials which were delivered by the representative of the rectorat member Dr. Slamet, M.A and the chief of committee H. Rina Sari, M.Pd.. After an hour ceremony in the building, the contestants were divided into some contest places. Exactly at 8.15, all contests in all separated places in UIN were held.

The first contest was the acoustic singing contest which was held in the third floor hall in C building. The game was contested by 22 teams which each team consisted among 4-5 members. The game was focused on how the contestants actualized their English speaking ability in singing skill by paying attention on their articulation, pronunciation, accent, which were combined with musical skill and confident. The songs were decided by the adjudicators which were divided into two categories that were compulsory and elective songs. The compulsory song was “More than Words by Westlife or Extreme” and the elective songs were 18 songs just like “Payphone by Maroon 5, Grenade by Bruno Mars, etc.”.

The second game was the dramatic master of ceremony which was joined by 20 students’ teams in room 207 in C building in UIN Malang. The teams were narrative and came from various departments in UIN such as Tarbiyah, Syariah, Economics, Culture Studies, Science and Technology, and many others. Many attractive shows were presented by contestants since the dramatic MC required them to make real show or role play based on what the MCs delivered on the floor. Some pretended to be the wedding MCs, others pretended to be the “Take Me Out Indonesia” MC which also providing some talents as the singles. Funny, interesting, fabulous, and memorable were the adjectives that mostly attached to the audiences who saw the contests. Instead of the informal dramatic MC, the contest also competed the formal seminar MC which challenged them to be the structured spoken MC in very controlled situation event.

The third game was the word quiz that was held on the green grass park in front of rectorat building. The choice of place was aimed to amuse students’ interest to join the game and made easy joyful English environment. It was successfully held since 13 teams joined the game. Here, various words categories from many fields were asked to the contestants and they were so active to answer. Many spectators came and support their friends in the game which make the contestants felt the spirit of competition and so did the committees in charge. (AIM). 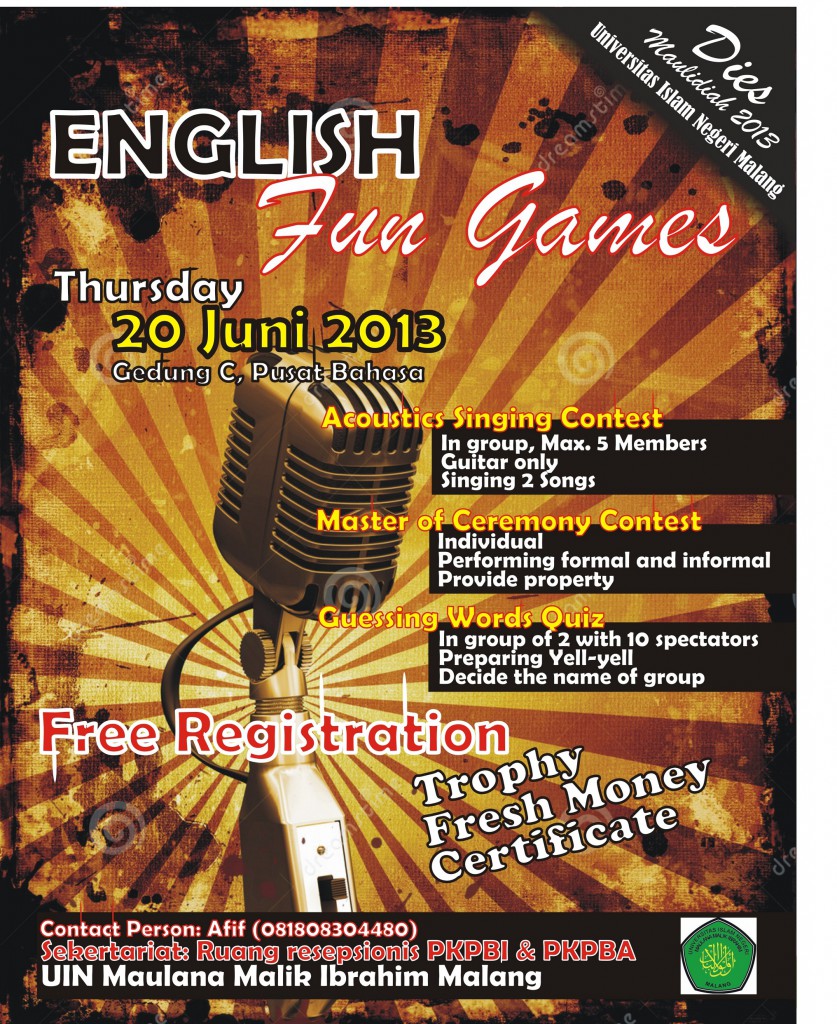