Being a professional teacher needs a long process and it can be achieved by having discussions with other colleagues to get more knowledge in teaching strategy. To achieve that goal, on 22 May 2013 English Language Center (ELC) UIN Maliki Malang held a monthly round table discussion followed by ELC lecturers. The discusssion was about sharing the experiences of the ELC lecturers in teaching reading English texts to their students interactively.

There were three ELC lecturers who presented their ideas about teaching reading interactively. The first presenter was Prima Purbasari, M. Hum who shared her ideas about  reading strategies that should be given to the students, those are skimming and scanning. The two strategies have different objectives. Skimming is reading quickly the whole text to get the main idea, while scanning is reading carefully to find and understand the important words in a text. From the two strategies, she stated that skimming is better than scanning since the most important thing is that the students can understand the main idea of a topic.

Then, the discussion was continued by the next presenters. The second presenter was Septia Dwi Jayanti, S.S who shared her ideas about student- centered in learning an English reading text. That the students should be able to find the meaning of  unfamiliar words by themselves after the teacher gives them some reading strategies. Next, the last presenter was Wahyunengsih, M.Pd who shared about the importance of giving the students knowledge of understanding non verbal information, such as how to understand information from advertisement, map, movie schedule, etc. By giving this knowledge to the students, it is expected that they will be able to get information easier from their society.

From the topics presented in the round tabel discussion, it can be concluded that actually there are many reading strategies that can be used to help the students understand English texts and make the class more interactive in learning how to read. The important thing is that the teacher should be creative in choosing the reading materials. It should be  based on students’need and the teacher should encourage the students to use the reading strategies they have known. (er)

As a monthly agenda, on April 25, 2013, English Language Center  (ELC) UIN Maliki Malang on behalf of Training Division held the third round table discussion. The round table discussion which is held once a month aims at facilitating the ELC lecturers to share their ideas in terms of English teaching and learning and other related topics which can help the lecturers in their teaching.

For this third round table discussion, the topic was Fostering Students’ Social Awereness and it was presented by Dian Arsitades Wiranegara, M.Pd, one of the ELC lecturers in UIN Maliki Malang. In this occassion he shared his ideas about the importance of fostering students’ social awareness toward their society and it can also be given in English for Specific Purposes (ESP) classes through different class activities.

One of the activities that can be given to the students  is by giving an assignment or project  called Students’ Vision Board. In this project  the students are assigned to observe further about what makes the social concern in their neighborhood. The topics  can be about poverty, natural disasters, corruption and et cetera. Then they should also prepare a story of pictures related to the chosen topic  to be presented orally in front of the class.

At the end of the presentation,  Dian Arsitades Wiranegara, M.Pd concluded  that building students’ emphaty toward the society is very important to be done.  Therefore, the lecturers need to be creative in preparing activities and media that will be given to the class. The activities are expected not only to practise the students’ language skills, such as practice speaking and writing, but the topics of the activities should also have moral values that can foster students’ social awareness. (er) 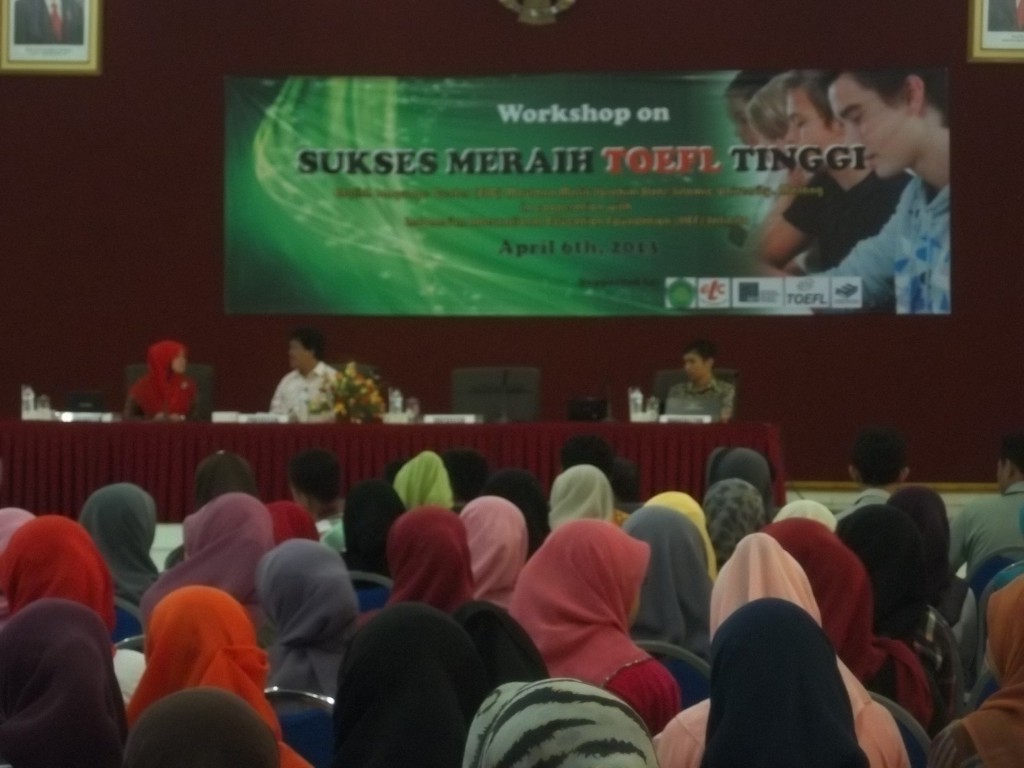 Test of English as a Foreign Language (TOEFL) is one of the standardized test that can be used to measure the students’ competence in English. By taking this standardized test, Indonesian students can know about their English competence in terms of listening comprehension, structure and written expressions and reading comprehension. Moreover, if they can achieve a high score, it can be used to apply scholarship. 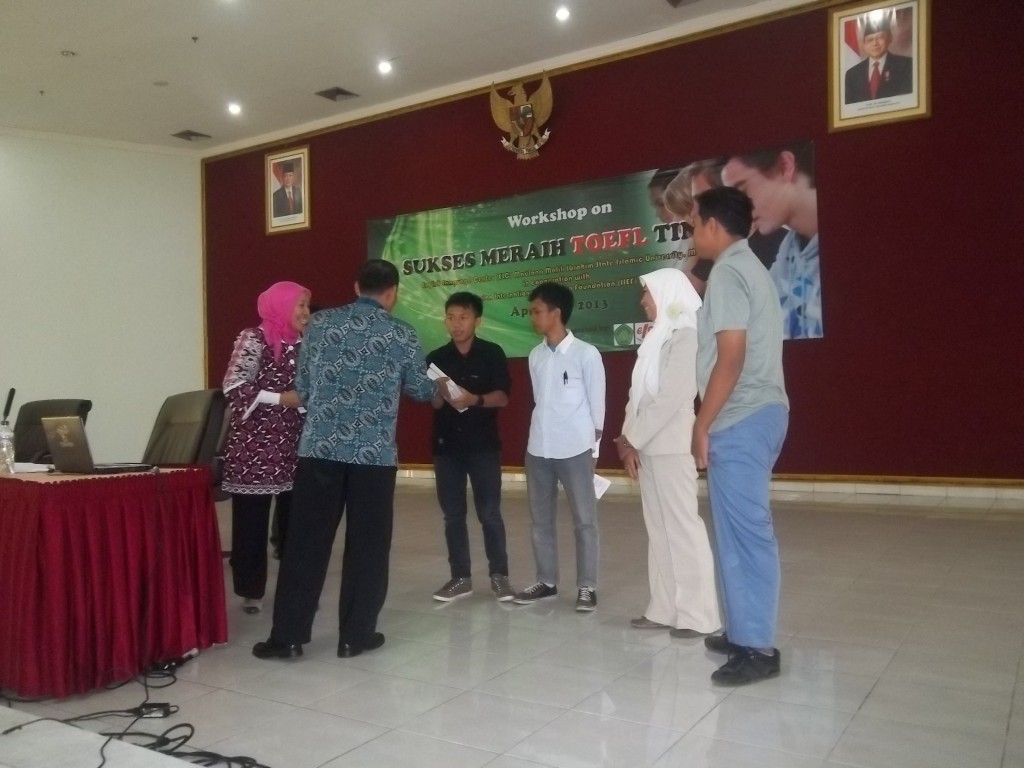 To facilitate the need of Indonesian students about the information of doing TOEFL, English Language Center  (ELC) UIN Maliki Malang held a workshop on ‘Sukses Meraih TOEFL Tinggi’ on 6 April 2013. The workshop  was held in the 5th floor of Ir. H. Soekarno building and followed by 354 participants. Most prticipants were students of UIN Maliki Malang, while some of them were lecturers of Poltekkes Malang and students of IKIP Budi Utomo Malang, STIEKN Jayanegara Malang,  Universitas Negeri Malang (UM), SMAN 2 Malang and SMA PGRI Lumajang.

Then the main agenda of the workshop was began by the speech of Prof. Dr. H. Mudjia Rahardjo, M.Si who delivered his speech about the importance of  joining standardized test. In his speech he noted that to face globalization era sucessfully and to get a good job in the future, Indonesian students need to complete themselves with any kinds of skills. One of them is mastering foreign languages, such as English, Arabic, French, etc.  The competence of mastering foreign languages can also help the students who want to continue their study in a foreign country and to achieve them they need to increase their language skills.

Next, the second speaker was Drs. Arif Subiyanto, M.A, a TOEFL practician from Universitas Negeri Malang (UM), who shared  his  strategies in doing TOEFL and achieving a high TOEFL score. He shared his strategies that can be used to answer the questions quickly and correctly. He also gave the participants  information about any kind of TOEFL books and web-site  that are suitable to be used to increase the TOEFL score.

Finally, before the workshop was finished, the participants were given TOEFL  simulation conducted by Wiati Rahayu, the coordinator of paper-bast test from IIEF Jakarta. In this session the participants did several questions from TOEFL  ITP source and discussed the answers  together. (er)